Ibn. Q. al Rassooli – An Iraqi exile & debunker committed to warning the world of the dangers of Islam

We predict lots of fireworks!! Tonight’s Guests will debate Validity of Islamic teachings

Founder, Civilizations Exchange & Cooperation Foundation – Born and raised in Damascus, Syria. He attended Damascus University and graduated with a degree in Islamic Studies and Arabic Language in 1987 and a degree in Islamic Law in 1988. From 1975 to 1989 under the guidance and mentorship of the late Grand Mufti of Syria, Sheikh Ahmad Kuftaro, he studied Quranic interpretation, wisdom of the “Shari’ah” and the Islamic spiritual teachings. From 1989 to 1997, he accompanied the Grand Mufti during most of his international programs and conferences.

He served as Imam in Damascus from 1981 to 1989 and was then invited to the United States to lecture in various Islamic Centers. He was Imam of the Islamic Society of Baltimore, Maryland Inc. from 1989 to 1993, founded An-Nur Institute for Islamic Studies and Arabic Language in Baltimore in 1993, co-founded An-Nur Mosque in Carney, Maryland and was the Imam from 1995 to 1997. Currently he is President of the Islamic Affairs Council of Maryland, based in Baltimore.

He taught courses on Islamic Studies at the Ecumenical Institute of Theology at St. Mary’s Seminary & University, the University of Maryland in Baltimore County (UMBC), Johns Hopkins University, Goucher College, the Renaissance Institute, as well as Comparative Religions at Potomac College in Washington, DC. Currently he is teaching at the College of Notre Dame of Maryland.

Since moving to Baltimore in 1989, he has been heavily involved with interfaith work, both nationally and internationally, promoting better understanding between Muslims and other Faith Traditions. 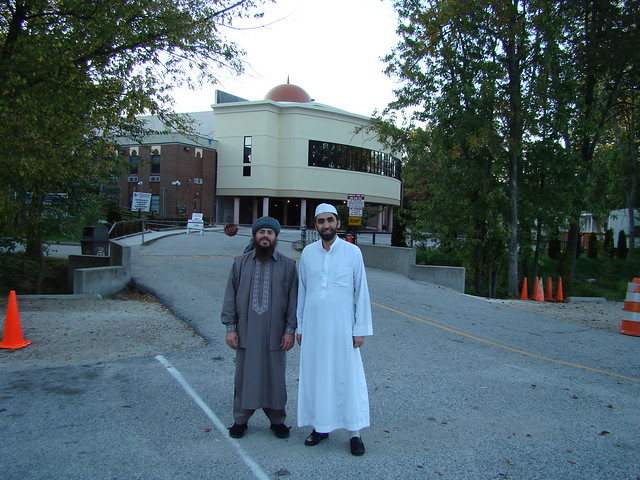 [person on the right in photo]

Also ~ A Must see Video!

See how the Anti-American ‘AFL- CIO’ brought thousands of illegals

to Statue Of Liberty